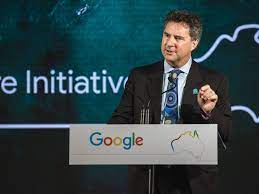 Australia’s national science agency CSIRO has entered into a five-year, multi-million-dollar partnership with Google to cooperate on commercialising scientific discoveries.

Announcing the deal at the Google Digital Future Initiative in Sydney on 16 November, CSIRO chief executive Larry Marshall said Google’s investment in Australian science would “supercharge our emerging innovation ecosystem, which is passionate and world-class but still small and fragmented, hindering our national delivery of real solutions from science”.

Marshall’s announcement, which did not go into greater financial detail, was made alongside Google announcing it would invest $1 billion over five years into its Australian operations including building a new research hub in Sydney and enter into the partnership with CSIRO.

CSIRO appears to be a beneficiary from Google and the federal government patching up relations after a rocky period last year when Google threatened to remove access to its search engine from Australia over the Coalition government’s plan to force global internet companies to pay Australian news organisations for re-using their material.

Prime minister Scott Morrison attended the event and said in his speech that he appreciated the approach Google had taken to dealing with some difficult issues.

“We’ve sat down and we’ve worked through them and I think we’ve got the right result for both the citizens of Australia and the technological future,” he said.

Google Australia chief executive Mel Silva said: “We did have to work through a very crunchy issue last year” but she noted that the issue had been resolved and Google had agreed to pay Australian media organisations millions of dollars for use of their content.

In his speech, the prime minister said the federal government had identified critical technology areas that it planned to support including quantum computing, artificial intelligence (AI), medicines and technology hardware critical minerals.

In his speech, Marshall said innovation ecosystems form around cornerstone companies. In Silicon Valley and Israel that company had been Intel. He said he accepted the challenge to return from Silicon Valley to run CSIRO in 2015 because he believed CSIRO could become the cornerstone organisation to catalyse Australian innovation in science.

“As the national science agency, CSIRO solves the greatest challenges through innovative science and technology – but we don’t do it on our own,” he said. “No matter how brilliant the science, it takes a company to make it real.”

That was why CSIRO was excited to be announcing its partnership with Google.

Both organisations focused on using science and technology to change the rules of the game, and by working together they would be able to deliver the “seemingly impossible trifecta of sustainable and societal benefit at the same time as profits”, he said.

Marshall said CSIRO and Google had previously worked together successfully on seemingly impossible challenges such as using science to counter the mosquito carried diseases malaria and zika.

“Imagine what other seemingly impossible problems we could tackle by putting our heads together,” he said.

He said CSIRO looked forward to working with Google to launch more of these bold missions.

AI was one area in which CSIRO’s science partnered with Google’s technology could make things happen – like the CSIRO’s current program which was using AI to combat crown-of-thorns starfish destroying coral on the Great Barrier Reef.

AI could contribute $20 trillion to the global economy in the current decade but Australia needed to choose carefully where to focus its development of this technology.

“Both CSIRO and Google have significant strengths in AI, but it will take a network of partners across Australia to turn that expertise into real solutions, focused on the markets where Australia can win – from farming to manufacturing to environmental management,” Marshall said. “Neither CSIRO nor Google can do this alone.”

“The world’s best innovation systems have not sprung up overnight, nor have they appeared spontaneously out of thin air.

“The cornerstone companies created the foundation, then their success planted seeds around them through investment and partnerships and networks that grew more and more innovative companies, until innovation became the driver of economic growth.

“Australia’s science is global top 10, when we kickstart our commercialisation engine to turn that science into real solutions for real customers, then we can drive our next wave of prosperity.”